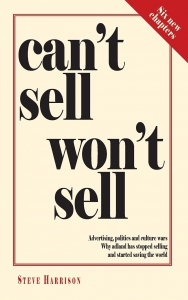 At the 2021 International Festival of Copywriting (CopyCon), well-known copywriter Steve Harrison presented a session, Can’t sell won’t sell, based on his book of the same name. In both the session and the book, he pointed the finger at an “out of touch ad industry” that “has stopped selling and started saving the world” instead.

The CopyCon session generated lively (but constructive) discussion on the chat stream. And I wasn’t the only attendee who followed it up by reading Harrison’s book, Can’t sell, won’t sell.

In the book, then, how does Harrison argue that the ad industry “has stopped selling and started saving the world instead”?

He opens with some compelling evidence, pointing out that of the 28 winning Cannes Lions awards in 2019, only six had increased sales as their objective.

That’s not necessarily a problem, of course, if consumers respond positively to other campaign objectives. It does, however, beg the question – what is advertising about if not sales? Later, he points out that of the total spend on digital advertising in 2018, about half had either a negative or an unquantified return.

From this, Harrison deduces that advertisers and marketers have “lost the knack of selling”, and the book centres on the argument that brands have become more about social purpose than commercial outcomes:

Being a force for good is the new purpose of brands and those who market them to the public.

Harrison combines this line of reasoning intertwines with his belief that advertising professionals live in a bubble and are dislocated from the majority of consumers. As he sees it, a leaning towards social purpose viewed through a London liberal-left lens is weakening the impact of today’s advertising campaigns.

Harrison’s primary concern is that the shift away from commercial selling means that the marketing and advertising industries are downgrading the very fundamentals of the profession. He argues that marketers have “abandoned the processes and practices” that “dramatised the benefit of the products/services we are supposed to be selling”.

Interestingly, he sees the austerity years following the financial crisis as a key moment in this – a time when training budgets were slashed. To that I would add that widespread job cuts at the same time may have disrupted the cycle of transfer knowledge from senior to junior staff.

For Harrison, the advent of digital marketing is when the rot sets in:

When digital hysteria was at its most frenzied, we were told we no longer needed a big idea that grabbed a prospect’s attention and dramatised the benefit of the brand we were building or the product or service we were promoting.

He tartly summarises the reason for this shift by saying:

Because with the advent of SEO, there was no need for any creative at all. Google’s software would do all the hard work for us.

This does not explain why the decline of marketing best practice took the form of social activism, though.

How representative is the marketing industry?

Harrison’s aversion to digital marketing is nothing compared to the venom he pours on the “left-leaning liberals” in the industry, whose “haughty indifference to flogging stuff has become an open aversion”.

Agency demographics too are at variance from the population at large. “84% of the agency workforce is aged 18-40,” he says. Yet “the average age of a new car buyer in the UK is 54”. And despite the industry’s support for the Black Lives Matter movement, 62% of BAME people said that advertising did not represent their cultures, according to research by Channel 4.

Patricio Robles sees this as a pivotal moment for the industry. He warns that if agencies cannot connect with their customers, they “risk adopting strategies and campaigns that, at best, won’t resonate with a large portion of the consumer population and, at worst, could alienate huge numbers of consumers”.

So what’s the answer? Here, Harrison makes one of his particularly constructive points, advocating the hiring of talent on the basis of cognitive diversity. “Which means recruiting from outside the bubble in which the industry is trapped and attracting people who will challenge our groupthink mentality.”

Can’t sell won’t sell – How true-to-life is it?

I started to question whether Harrison’s descriptions of the marketing industry reflected my own experience. At one point, he claims that only 17% of marketers truly grasp what a customer value proposition is. Notwithstanding the pedigree of this source (the Fournaise Group), is this really true?

I was employed by Birmingham-based marketing agency Tomorrow People up to a few years ago. The directors were knowledgeable and rigorous on marketing fundamentals. (The same is true of my freelance clients today.) It’s interesting, then, Harrison seems to let agencies outside London off the hook:

“These regional shops are staffed largely by local talent, to service local businesses and sell to local people. And, guess what? This local knowledge is a big advantage.”

But we offered more than “local knowledge” (and serviced national and global brands, not just “local businesses”). We based our content marketing strategies on robust marketing fodder like value propositions, growth targets and personas. And as an aside, the agency was staffed by a genuine diversity of individuals in terms of class, ethnicity and political opinions.

How accurate is Harrison’s depiction of the London marketing and advertising scene, anyway? Does he really see regional marketers as distant flagbearers of marketing rigour, unseen by their metropolitan counterparts whose eyes are trained on social activism? The truth has to be more nuanced, surely.

Targeting the middle ground in the culture war

On the one hand, there seems to be a genuine appetite among consumers for some degree of social responsibility. 62% want companies “to take a clear position on current and broadly relevant issues such as sustainability, transparency and fair employment practices”, according to Accenture’s influential research report, To Affinity and Beyond: From Me to We, The Rise of the Purpose-Led Brand.

Harrison follows this up, however, with other research that finds that in the UK, 40% of all food shopping is purchased to take advantage of a promotion of some kind. In other words, as Harrison argues, “saving the world comes a distant second to saving money”.

This aligns with research by the More in Common Community founded in memory of Jo Cox, which found that two-thirds of Americans “share a sense of fatigue with our polarized national conversation, a willingness to be flexible in their political viewpoints, and a lack of voice in the national conversation”.

Most people, then, crave a middle way. Harrison’s middle way is one where organisations do good deeds before talking about them, and align their activism with brand in a meaningful way. One example he points to is Belfast-based Madhug, “which gives a backpack to a child in care for every one it sells”.

This contrasts with what Unilever CEO Allan Jupe calls “woke wash”, in which an organisation’s social activism is disconnected from its brand, products and services.

Is it worth adding ‘Can’t sell won’t sell’ to your reading pile?

The book is a good read for marketing and advertising people alike, but it’s not without its flaws. To me it felt like two books in one, the first one being the one he’d probably like to write but hasn’t, and that’s a book about the culture war. Harrison makes lengthy digressions into the climate emergency, Trump and Brexit that go beyond the need to provide context for the marketing and advertising problems he’s concerned with.

But surely, no self-respecting marketer wants their campaign to be perceived as “only adopting these causes because their focus groups and their data crunchers tell them to”. We want to be using all the great research we do to target the right people with the right messages. Harrison argues that this isn’t always the case, and sees the pandemic as an opportunity for marketers to return to first principles, citing Keith Weed, former CMO of Unilever:

We collectively need to make the argument that while some of the rules of business have been re-written during lockdown, the basic need of brand awareness and communication of brand benefits remains key for brands to drive growth… Let’s unite as an industry to show why advertising matters in building businesses and brands, the economy and jobs.

Harrison’s critique of the industry and his clarion call for more diversity are worth engaging with, even if you disagree with the book on either professional or political grounds.

NEED HELP WRITING BLOGS OR OTHER CONTENT? GET IN TOUCH